SOME things never change would seem to be the case after the Robins posted another emphatic victory over struggling Brislington at Ironmould Lane on Saturday afternoon, writes Kerry Miller.

Jack Taylor kept up his goal a game record, Jake Llewellyn did not miss from the penalty spot and Briz self-destructed once more as United took fourth position in the league and completed a 12-1 aggregate double.

The home side currently have their manager on a four match suspension and played all but 19 minutes with ten men following a ludicrous two footed lunge on Adnan Hiroli by Harry Tobin.

And Bridgy took full advantage to claw back some of the damage done by the home defeats by Ilfracombe Town and Millbrook.

It was a professional performance from Dave Pearse’s side who carried on their good form from the second half of the Wellington game and, despite going behind early on, were never really uncomfortable and the travelling support enjoyed their day out.

Nick Woodrow and Morgan Williams were on the injured list but Ryan Brereton and Dave Thorne returned to the bench after long spells out while the influential Tom Llewellyn sat out a one match  ban for accumulated cautions.

Bridgwater began strongly and Harry Horton set up Mike Duffy whose shot was deflected for a corner and from another set piece Ross Edwards came up from the back to nod just over.

It was a surprise when Briz countered and Jordan Scadding combined with Josh Brace who was given too much room and exploited it to the full on 15 minutes.

Jake Llewellyn let Jack Taylor off the leash moments later and his cross was just cleared by Scott Lewis then Taylor released Duffy who was free but denied by Callum Heal in the home goal.

It was a short reprieve as from the short corner Duffy drove home the equaliser from 18 yards and everything went south for Brislington from then on.

Three minutes later Tobin appeared to clash with Hiroli and when the wing man got the better of the home defender in a tackle, there was only one outcome when the mist came down and referee James Hooper was flourishing his red card before Hiroli had hit the ground.

George King then scuffed a shot when free which was a disappointment as the former Clevedon Town midfielder had a fine game to the point where Tom Llewellyn’s suspension did not greatly affect the side and his side’s dominance was hard to take for Brislington who have a habit of collapsing at the back and for a while the match began to bubble under and became niggly for a while around the half hour mark.

Edwards again went close from a Llewellyn free-kick and Horton’s 25 yard shot was parried by Heal and put away by Taylor but he was offside.

George Jones was still proving to be a nuisance up front and he collected an early caution and then flattened Jordan Greenwood and was possibly fortunate to stay on the field. 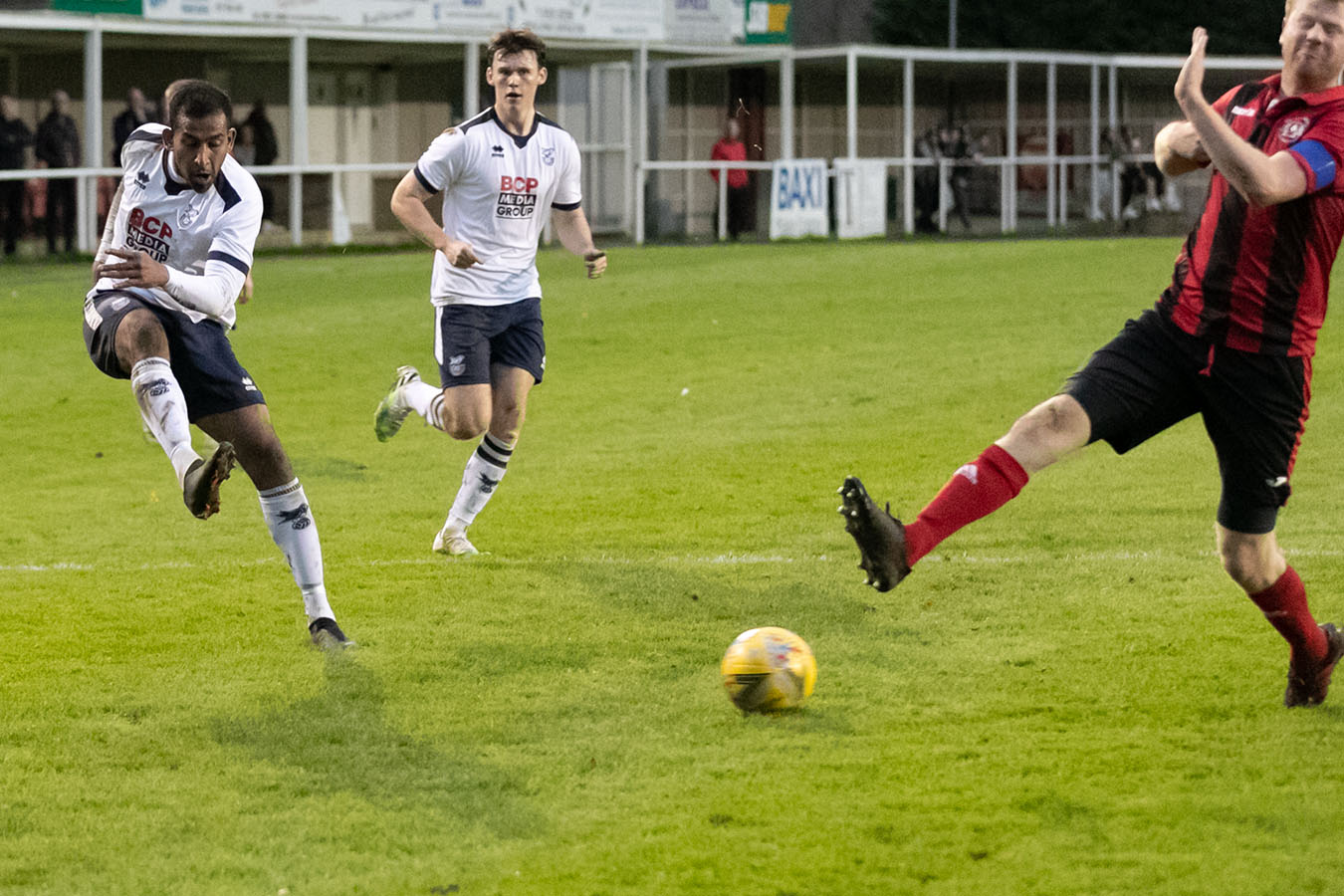 After the break Duffy tried an audacious flying volley from distance but it mattered not as Hiroli and Edwards worked well and Taylor was left free on the far post to compose himself and roll in his 18th of the season.

To their credit the home side battled on and after forcing three corners in succession Jones brought a flying save out of Jake Viney, on his 201st appearance in a Robins’ shirt.

He kept his side’s lead with another point blank save from a further corner before Pearse and Karl Baggaley began to ring the changes to tighten the grip on the tiring ten men.

Ryan Brereton joined the action and almost immediately crashed a left foot drive against the bar then Hiroli made way for young newcomer Cameron Gauci before the game was made safe with just over 15 minutes left when another corner was not cleared and man of the match Duffy drilled a bullet which went through Heal’s attempted save for a well deserved third.

Jake Lewellyn was enjoying his return and went on a mazy run through the middle before Heal kept out his 18 yard effort but he was not to be denied as Taylor was brought down in the penalty area with four minutes left and he tucked away the spot kick with the minimum of fuss for his third goal of the campaign.

Gauci went close as the game eased to a finish but it was left to Ross Edwards to nod home the fifth from yet another corner and set the Robins up perfectly for Saturday’s long awaited FA Vase home clash with Mousehole (3pm).