Labour unhappy with naming of ‘Northgate Yard’ without consultation

THE ambitious Northgate project in Bridgwater was hit by a wave of criticism at a full meeting of Sedgemoor District Council yesterday when Labour councillors expressed anger at the decision to name the project ‘Northgate Yard’ without any consultation.

The prestigious, multi-million pound development will feature a seven-screen cinema along with four restaurants, bars, and a gym/leisure space as well as open space, sitting areas and gardens which will lead onto a revamped Brewery Field.

Leader of the Labour group, Westover councillor Brian Smedley, said: “This is a project that we have supported and which we welcome but to be suddenly told of this name Northgate Yard and not be asked seems to fly in the face of genuine consultation.

“There is absolutely no historical precedent for this title. The site was originally Blacklands – a Medieval term relating to evidence of historic settlement. Then it was Northgate – as in the brewery that stood opposite the North gate of the walled town. And more recently Splash – which Sedgemoor famously closed down and demolished in the face of public opinion back in 2008.

“To call this a ‘yard’ is gibberish and has clearly been dreamed up by some marketing agency. What would it have taken for Sedgemoor to have simply asked us rather than telling us!”

Sedgemoor’s Deputy Chief Executive, Doug Bamsey, told the meeting: “We had to come up with a name that was marketable and recognisable and so fundamentally we’ve decided.”

And council leader Duncan McGinty (Con, East Polden), added: “We need to market the site in a global environment. We are happy to hold a briefing session to explain the choice of name.” 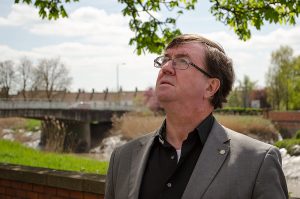 Cllr Smedley remained unhappy, saying: “We don’t want to be told, we want to be asked. What on earth does ‘yard’ mean in this context? It’s not some enclosed space, it’s not some three feet section of distance. Is it some obscure reference to ‘Yards’ as in Jamaica where they mean ‘working in the yards of the wealthy’.

“It doesn’t sound like a good choice to me and there’s local people and historians who really needed to be asked first. This is total developerese and marketspeak.”

Cllr Julie Cordiner (Lab Victoria) said: “You’ve already caused concerns amongst the people by chopping down most of the trees on site without an adequate explanation and now this. This is such an important project to get wrong.”

She was backed by Cllr Hilary Bruce (Lab Fairfax) who added: “I take offence at this. It’s not enough to tell people, if you want to take people with you then you have to involve them.”

Cllr Leigh Redman (Lab, Hamp) said: “The main point here is the need to bring the people of Bridgwater with us and telling us it’s fundamentally decided is not doing that.”

Labour also received some Conservative support.  Cllr Will Human, (Con, Wedmore) said: “I have to agree with the Bridgwater councillors that this is extraordinary that the name that will sit with this site hereafter hasn’t even been cleared with the ward councillors and the people of Bridgwater.”